“There is nothing more human than the will to survive”

The conflict between mankind and machines with artificial intelligence seems to be popular in movies if we recall recent titles like “Her” or “Automata”. This release confirms it. Their approaches are nothing new for the big screen, really, if we bring up “2001: A Space Odyssey,” “Blade Runner” or the frightening “Demon Seed”. The thing is that an exponential growth of new technologies is being perceived, therefore we feel like they cannot be very misguided about what awaits us in the future. So, it is becoming more and more a question of science and less of fiction, their dilemmas and warnings are of particular interest as it happens with this interesting and significant production.

Most of the plot takes place in claustrophobic, minimalist scenarios, but designed in such a way that they result equally attractive and suitable to become a silent character which produces tension and uncertainty.

The story introduces us to a well-known programmer who is invited by the president of his company to spend a week in the sophisticated and secluded mansion. This incredibly wealthy host is a genius of robotic engineering and proposes to the young guest to interact with his new creation, which has the appearance of a beautiful woman.

From the beginning we sense that nothing is what it seems and the script will dose the shock effects until a brilliant and unexpected ending. Its greatest virtue lies in how to characterize the three protagonists, building up a very solid story set fluidly moving from less to more, transforming these characters and uncovering their secrets, so that the roles of “guinea pig” and “superior” shift from one to another.

There are three actors who, long ago, deserved the sufficient merit to be considered the best of the best among the new performers who have recently taken powerful roles on the big screen. Here, Domhnall Gleeson (“About Time”, “Unbroken”), Oscar Isaac (“Inside Llewyn Davis,” “The Two Faces of January”) and Alicia Vikander (“A Royal Affair”) live up to expectations again; Vikander even beats her peers for the way she deals with the changes of the android she gives life to.

A film which, for sure, with the passage of time will be one of those so-called cult films of the genre. 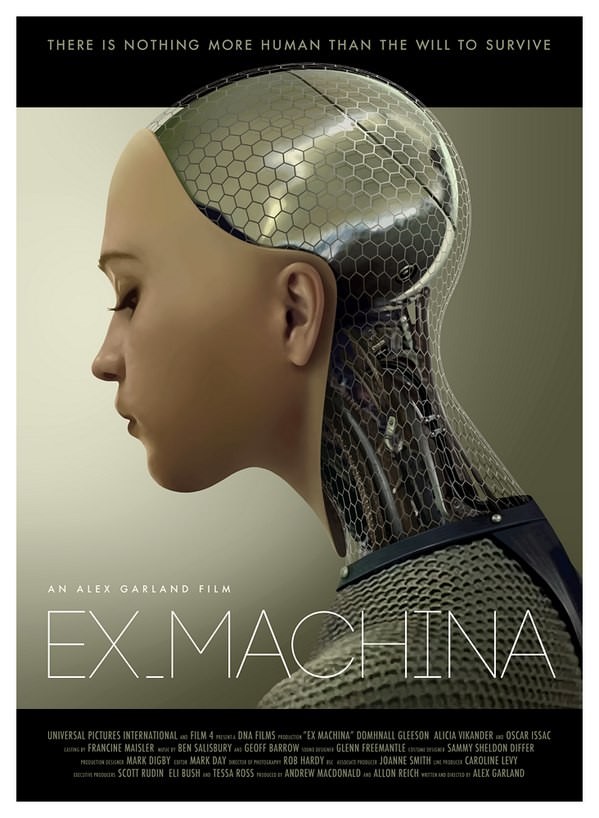