We are facing a necessary documentary, that kind of real stories that transcend the screens, something that, unfortunately, is not fiction and that when it finishes it stays in the room of the cinema. No, we are facing a painful veridical affair that affects the society of a whole country, Spain, and specifically of the Valencian community that has suffered so much, and continues to suffer, due to the putrid corruption of the politic party that has governed decades (by democratic decision of many times an overwhelming majority of Valencians) and to which has been given a generalized silence before his misdeeds on the part of the majority of the citizens of this city, this community, this country. Provided that something doesn’t affect us directly, however serious it may be, it’s easier, to look elsewhere…

Well we are going to contribute our little bit of sand and for the first time in our web we are going to make a single article written by three different contrinutors, showing each one his own opinion before the facts that so well narrates this great documentary, something never done until the date but, undoubtedly, this occasion deserves it.

On Monday, July 3, 2006, at approximately 13:03 hours, a train of the line 1 of the underground of Valencia that was going to Torrente derailed in the entrance of the station of Jesus causing the death to 43 people and wounding with more or less seriousness to other 47. This accident is the most serious accident in a underground in Spain and one of the most serious in Europe. Sadly only surpassed at national level by the railroad accident of the Alvia 04155 to Santiago de Compostela that in 2013 left the fatal number of 79 people deceased.

This dramatic event occurred in addition to just 5 days of the Fifth World Meeting of Families held in the city of Valencia and was the visit of then Pope Benedict XVI to the capital of the Turia. And of course, all the authorities of the Valencian government at that time were very much in the throes of the Holy Father’s visit to the city. Logically, for the rulers and for much of the Valencian society, there was not much time to elaborate on the causes of this fatal accident;”I believe that the parliament has to be sensitive enough not to delay these issues because the only thing they are doing is rummaging in the deep wound that these people have” as discussed in the documentary the president of the Commission of Inquiry that was constituted three weeks after the accident, becoming the shortest of the parliamentary history arriving to have 32 appearances in 4 days. Speechless.

To all this in the documentary shows what was at that time a secret to voices; Valencian public television, Canal 9, had indications of the highest levels to try to silence or sweeten the information of the accident in the most subtle way possible, as it was said in one of the first information of the derailment: “An accident such as the past monday is absolutely inevitable”. This “strategy of silence” was finally uncovered in the last days of broadcasting of the Valencian audiovisual entity, in which the workers themselves declared in front of the cameras: “Canal 9 had an unworthy attitude for a public television that should have been On the side of its citizens, “as the RTVV news editor also comments in the documentary:” We are all guilty of what has happened. “

And I then wonder, was there no journalist on any Canal 9 who was able to rebel and publicly say that the truth was being manipulated and concealed? Not one? How sad the truth, very sad, even calling themselves “journalists”, although the truth is that a good part of the blame belongs to all of us, especially of Valencian society, as it is also quoted in one of the feature films: “We We have become a comfortable society”. All this doesn’t mean that those responsible for this tragic accident were the workers of the extinct Canal 9 and its leaders, no, but many times as guilty is the one who does as the one who is in silent… 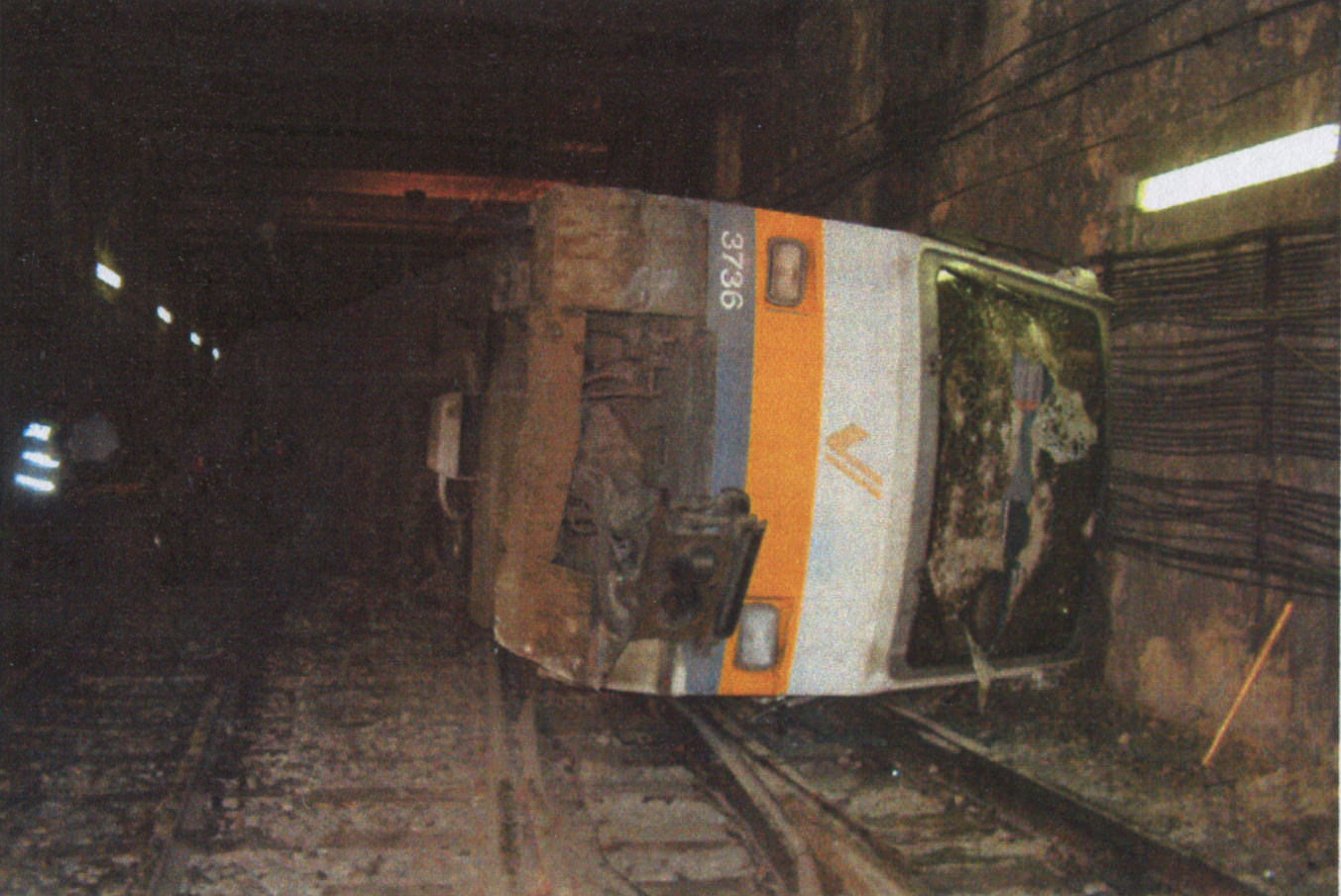 Regarding the causes of the accident, it is again demonstrated that we are fighting against an established order, and I say again, because as detailed in this documentary this tragedy could be avoided, as in the train accident of Santiago de Compostela in 2013 with which it keeps sad similarities. The fault of all was the lack of means on the part of the corresponding administration to invest in methods that ensure that an excess of speed did not cause a derailment, as for example the ATP (Automatic Protection of Trains), a system of security that supervises Driving on trains and applying the emergency brake when certain safety conditions are not met. Of course, this system was very expensive, specifically 40 times more expensive than the FAP (Automatic Point Braking), which serves as a beacon for information to the driver but only at certain points on the tracks, and it is not difficult to guess which system was was used in all lines of Metrovalencia, despite the technical recommendations that had been asking for years, in vain, the implementation of ATP in all lines. Aberrantly logical on the other hand, since those funds had to be allocated to other sites…

Finally, in the human terrain, it’s necessary to emphasize the incessant struggle on the part of the families of the victims and the affected survivors who against wind and tide have not stopped looking for those responsible for these dramatic events to be brought to justice. We are talking about a battle of many years, specifically nine, of an association of victims who aptly are called “0 Responsibles”, rarely can a name for such purposes be more accurately found. Although curiously what most members, if not all, seek is a sincere statement of forgiveness on the part of the politicians of that time, something that to date has not happened personally. Made totally unheard of as it has come to confess to whoever writes a high member of the Popular party in Valencia, that has been a huge mistake on the part of the high spheres of that political party that has ruled in the Valencian community during a whopping of twenty years and sixteen of them with absolute majority.

In summary, “La estrategia del silencio” is an indispensable and necessary documentary that should not be missed, as well as “Frankenstein 04155″ (2015) by Aitor Rei that describes in a very detailed way the events that occurred in the railway accident of Santiago de Compostela. The latter, by the way, had a special mention in the edition of La Seminci of 2015.

I don’t have very clear to which part of me to held on to write this critic, to the pain, to the sadness, to the frustration or to the anger. Finally, I held on to this part of me that is always stands up when everything is collapse around me, the reason. The reason is the only thing that the families of the victims and the survivors of that accident. The 3th of July in 2006 at 13:03 the world was stopped in the “Jesus” Metro station in Valencia. 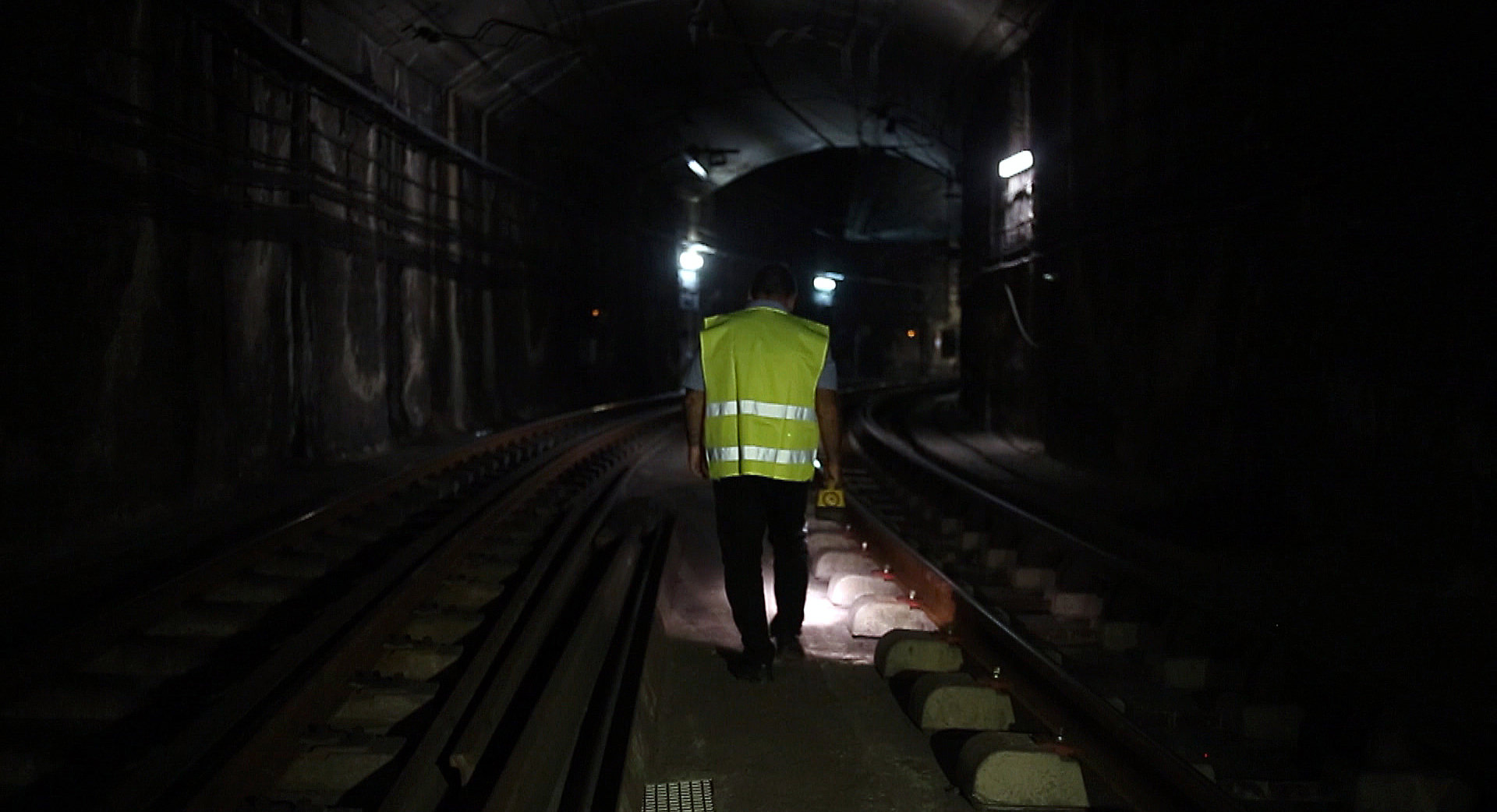 Everything is exposed suede the spectator’s eyes. They sat in cinema seat feel growing the consternation, the misunderstanding and the anger. This documentary isn’t innovative but about its topic and treatment is a shock, like a slap in the spectator face…Only one bad thing, is a little politic, puts the blame in the corrupts politics but the scenes too much flattering with the new government in Valencia. This dirties the documentary.

Friday, the 5th of May, 8 in the afternoon. Aragó’s Cinema auditorium where “La estrategia del slencio”is released is filled; tickets to watch the documentary about the fatal accident that occured in Valencia the 3rd of July of 2006 are sold out; and there’s an open question that comes to mind: where were those people when the victims were protesting? This, with any other questions, are the ones that Vicente Peris achieve to ask the spectators though this film.

The “Victim’s Association” made it clear, they wanted to show all they have been subjected to since the accident happened: denials and lies from the responsables, bribery attempts trying to keep them quiet, etc…

And all of this accompanied by the worst partner: the lack of understanding from some of their relatives, and the lack of support and solidarity from most of the citizens in Valencia.

Circumstances that made this fight hard for the people involved in this story because for a long time they didn’t seem to be making any progress. But after all they have also proved that we need to fight for our rights and freedom.

As is said in the documentary: “it’s easier to sit in the coach than to get up and fight for something that doesn’t affect us”. 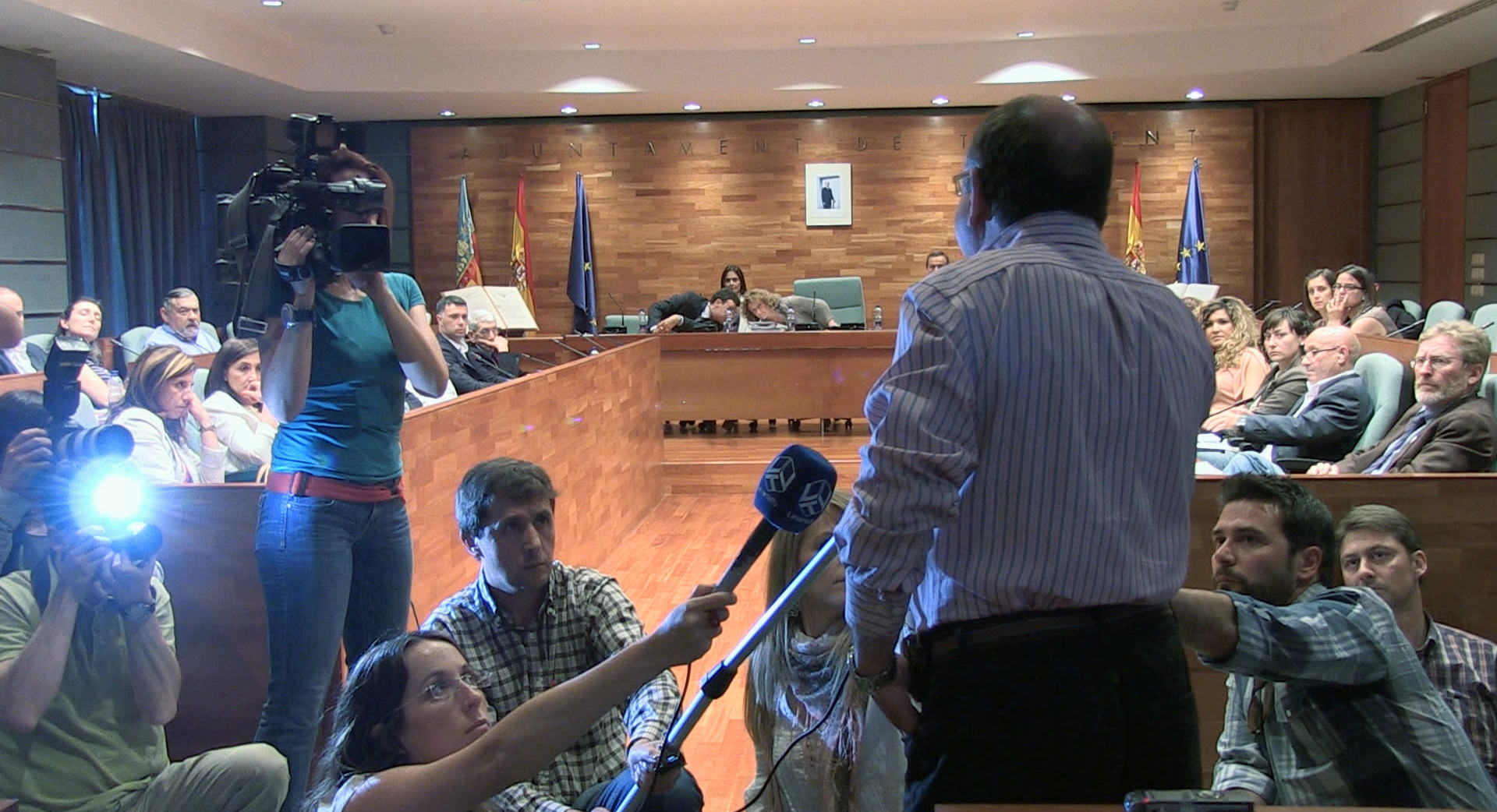 It’s difficult to feel other’s problems are ours, but misinformation affect us all, and when the truth about a incident is hidden from us; our rights as citizens and our dignity are broken.

For that reason I specially liked the optimistic scenes of this story: the scope of the Salvados’ program dedicated to this incident or when they bring the case to the European Parliament. Knowing this story gave me strength to defend my principles.

I think that’s necessary to watch “La estrategia del silencio”, especially for all the valencians. Many don’t know even half of the story and many others maybe prefered to looked the other way, but the facts are undeniable and it’s necesarry to face reality, and this documentary helps to achieve it.

Empathy is a necessary quality to improve society and for that reason we should exercise it. 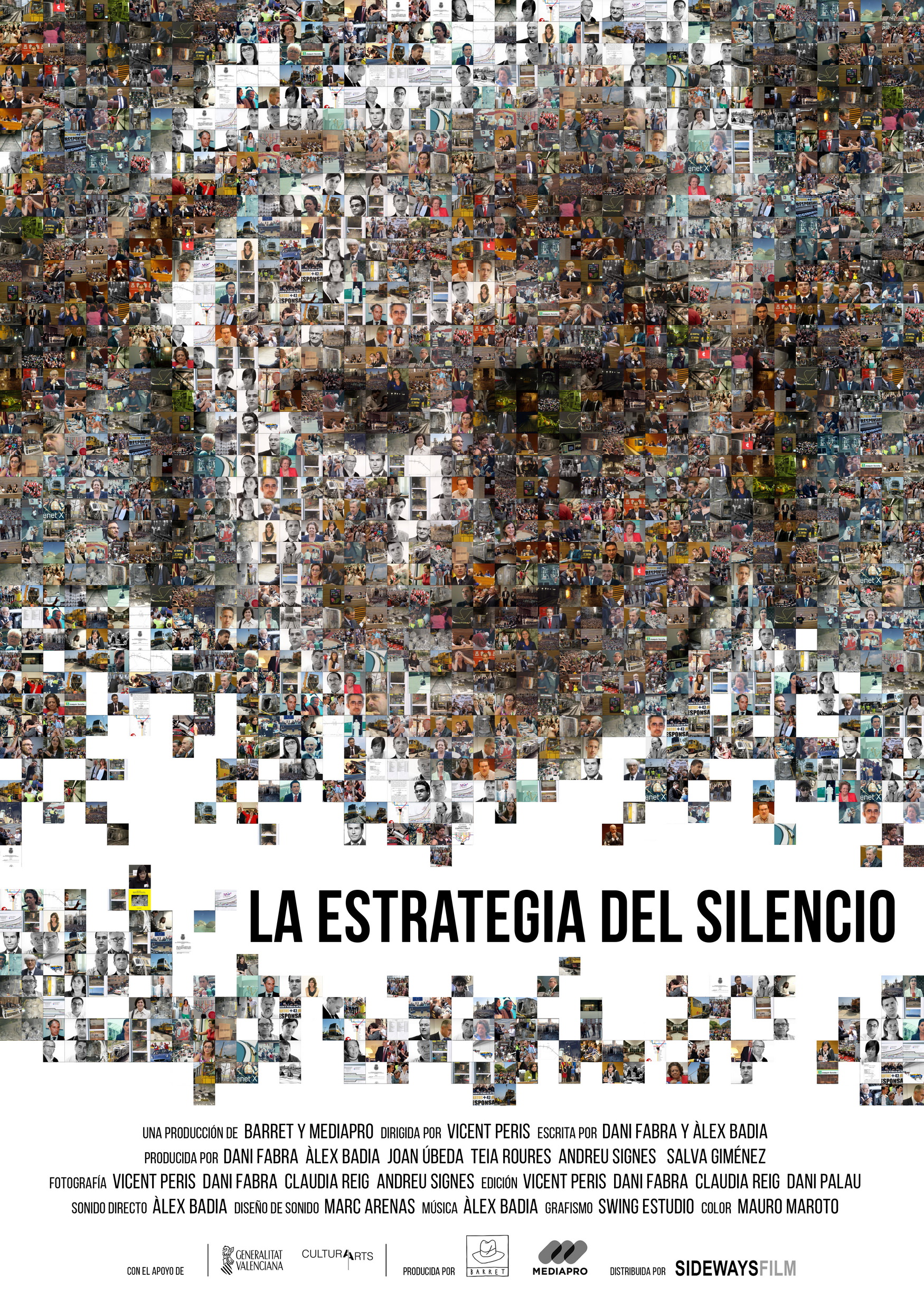