“The Parkers would like to have you for dinner”

A 2013 horror film directed by Jim Mickle, who previously directed “Mulberry Street” (2006) and “Stake Land” (2010), he recently completed the thriller seen in Sitges festival this year: “Cold in July” (2014), released in Spain as “Frío en julio” in a very limited way: it was never seen in some cities.

The film concerns us “We are what we are”, pending release in Spain, is a great film showing cannibalism in a very real way, in fact, the special effects are almost zero, but offers a simply terrifying makeup and performance.

The film tells the story about Parker family, a seemingly normal family who recently lost their mother, fulminant mysteriously dead and bleeding in the mouth and nose.

While waiting for the autopsy, the patriarch of the family, Frank Parker (containing even terrifying character brilliantly performed by Bill Sage, luxury supporting actor in numerous movies) governs straightness the family, apparently with little pain for the recent loss, consisting of Rose (Julia Garner) and Iris (Ambyr Childers) sisters and the baby of the family Rory Parker (Jack Gore).

The two sisters have to continue the terrifying “family tradition” imposed for years, previously executed by the matriarch of the family, recently disappeared. Both sisters doubt if they are doing the right thing, but as said the title of the film: “We are what we are”…The Little Roy seems oblivious to all this, but despite his childhood he knows what his eyes are seeing.

To in this plot joins doctor Barrow, the village doctor, performed by Michael Parks, lately favorite actor in Kevin Smith’s films (especially hilarious and surreal in the latest craziness of this director: “Tusk” even unreleased in our billboards yet).

The development of the plot is simply terrifying and narratively very well performed to acting level and well done by director Jim Mickle who uses a more solid script.

The end of the movie is just creepy, but brilliant at the same time. The film manages to get you inside the plot and feel participant in what is happening and especially why is happening.

That final climax gives excellent approach to be showing the film slowly, using a well-documented real disease, that is the “Kuru”, common illness among natives of New Guinea in the early of the twentieth century due to their cannibalism, and showing us that familiar cannibalism transmitted from generation to generation, shaping the ways of how to perform successfully in a mysterious book that serves as a brief McGuffin to the plot.

Notably in the movie the fact how you can make real horror without using a single special effect, makeup effects only. It also has some brilliant performances, especially that two protagonists sisters with their inner struggle about what is “good” (family tradition) and what is “wrong” (society and moralism). Also noteworthy is the cold, tight and fierce role of Frank Parker, the patriarch of the film, a man of very few words, but rather expeditious methods who seeks to meet the family tradition either way.

The only fault can be blamed for the movie, in the words of Ángel Sala director of Sitges festival, is that it was not awarded any major reward in the edition of the festival in 2013, because it is a remake of the Mexican film “Somos lo que hay” (2010), directed by Jorge Michel Grau (who also works in the script for this new version). It seems that this fact influenced the jury that chose not to consider it among the winning films, but in my personal opinion this is one of the rare cases where the remake improved the original film. True that it is based on an idea embodied in a previous film, but develops into a plot lengths to which even not remotely the original movie arrives.

In short, a not suitable film for all tastes because of its visual toughness, but a great film not only in the horror genre but in any film genre. 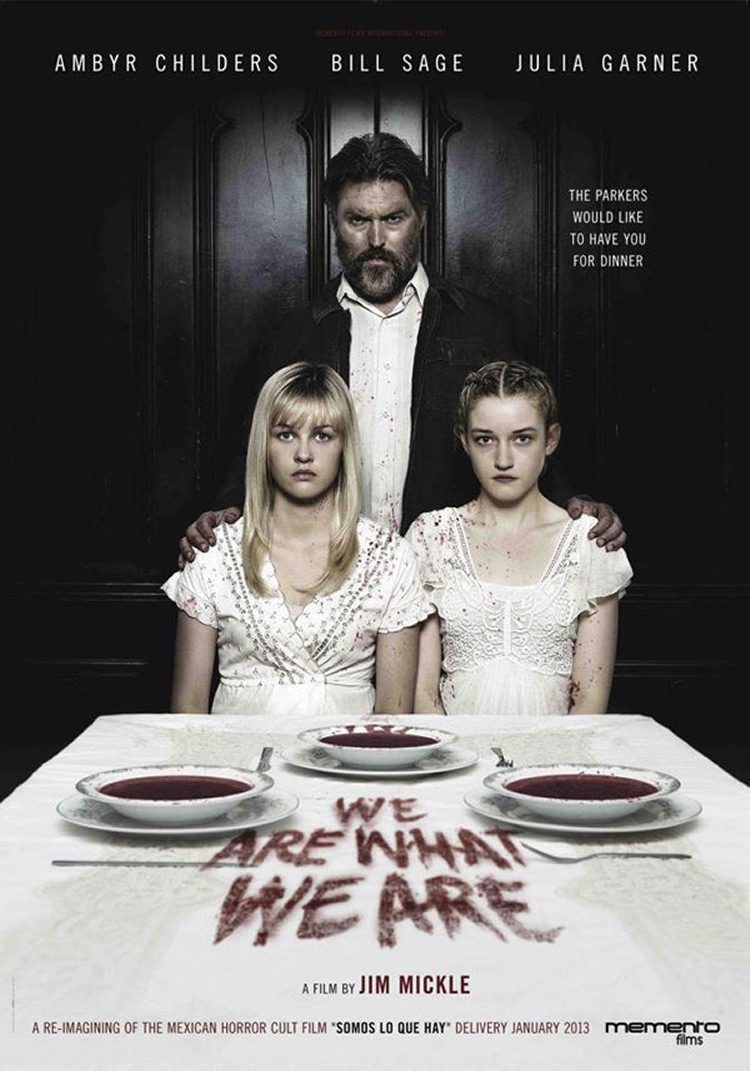